Here are five of my favourites.

My favourite Addams Family movie is Tha Addams Family Values. The Addams Family are a wealthy tight-knit family of spooky characters with a taste for the macabre. The films are always more funny than actually scary and I love the dry humour and the gothic imagery. Wednesday Addams is a style icon.  In The Addams Family Values, a new baby is born that Wednesday and Pugsley dislike and try to do away with. The family hires a nanny to look after baby Pubert, and the nanny and Uncle Gomez hook up. Wednesday and Pugsley are suspicious of the nanny and try to work out what she’s up to. My favourite scene in this films is when Wednesday is forced to participate in a production about Thanksgiving at summer camp, and she leads the children who have been cast as Native American’s in revolt. This film is silly, gothic and over the top – everything that Halloween should be!

Okay, so Sabrina The Teenage Witch is not a scary programme, but there’s lots of magic, a talking cat, and some excellent 90s outfits, which makes it perfect tv material for the run up to Halloween. I’m sad that I no longer live with Chelsea and therefore can’t borrow her Sabrina DVD’s or her collection of Sabrina magazines, but I might still try to watch as many of the seven series as I can. Sabrina finds out on her 16th birthday that she’s a half witch and has magical powers. She lives with her two 600-year-old aunts, who guide her through the troubles of being magical and being a teenager. You can’t watch this programme without wishing you will someday find out that you have secret magical powers too.

Hocus Pocus is not really a good film. It’s very cheesy and a lot of the acting is bad but it’s just so much fun! Watching this film makes me wich I could spend Halloween in a suburb in America just once – they seem to be doing it right. A boy called Max accidentally resurrects a trio of witches on Halloween by lighting a candle in their old cottage. A friendly cat tells Max to steal the witches spellbook so that they can’t kill any children, and the witches chase Max to try to steal their spellbook back. I love that Sarah Jessica Parker is one of the witches.

4. The Nightmare Before Christmas

I’m never sure whether this film is a Christmas film or a Halloween film,  but I think the abundance of scary imagery makes it primarily Halloweeny. I’d be surprised if any of you hadn’t already seen it, but just in case, here’s the plot… Jack Skellington is the Pumpkin King of Halloween Town – the holiday town responsible for Halloween. When Jack goes for a walk, he discovers the portal to Christmas town and is overcome with excitement. Jack decides his town is to take over Christmas, but the pumpkin king doesn’t understand how to create a holiday without things that go boo and things start to go horribly wrong. The film also features a love story between Jack and a rag doll, Sally. 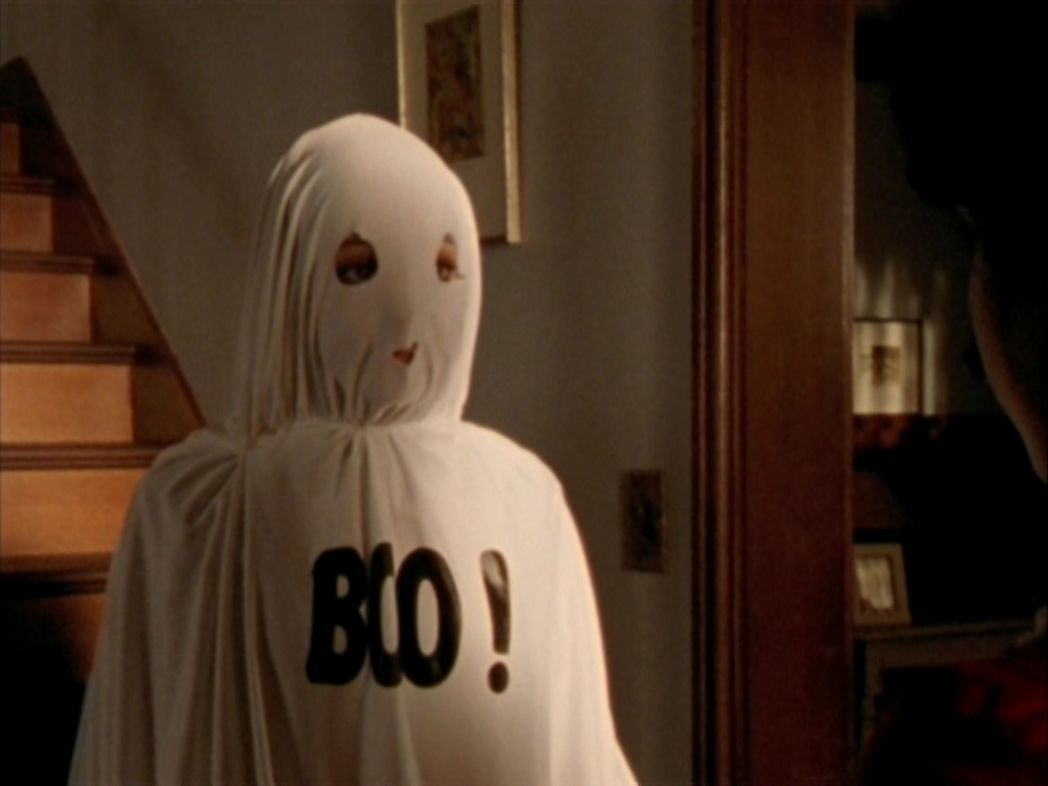 I am new to Buffy. My boyfriend is Buffy obsessed, and I used to tease him for it, but we’ve been watching it together, and I can’t remember why I thought it was silly. Buffy lives in a town called Sunnydale, which is on a “Hellmouth”. This means there are always vampires, demons and monsters popping up trying to take over the world. Buffy has been chosen to be the Slayer, so she is super strong, has a duty to protect the world from evil, and steaks a lot of vampires. She’s guided by her watcher, Giles, and her two best friends Willow and Xander are always by her side. I guess I was unsure about Buffy at first because vampire stories can be kind of cheesy. However, Buffy never takes itself too seriously and I love that Buffy herself is this really badass 16-year-old girl. Willow is my favourite character though – she has the best 90s style! Every episode of Buffy is kind of halloweeny but there are also some excellent Halloween episodes.

What are your favourite Halloween films and series? I already have The Craft and The Munsters on my to watch list, but I’m always looking for new suggestions!

Hello there! Nice to meet you, I'm Jess. Twenty-four. Edinburgh. Tree hugger. Obsessed with Halloween. I like elephants and bell bottoms and my bunny rabbit Archie. You can usually find me in the pub, watching Buffy, hunting down vegan junk food or crocheting on the sofa.

I blog about crafts, personal style, food and travel!